The development and differentiation of cells and tissues relies on the correct delivery of receptors, transporters, ion channels and important signalling molecules to the plasma membrane (PM) via the secretory pathway. Mutations of key machinery along the secretory route lead to a plethora of  diseases, including Parkinson’s, Alzheimer’s, Huntington’s diseases, cognitive disorders, neurodegeneration, and cancer, emphasizing the essential role of secretion for cell function. One of the main sorting stations along the secretory pathway is the trans-Golgi network (TGN; Fig. 1), where various post-Golgi cellular highways are thought to diverge (Guo et al., 2014). In polarized epithelia the TGN orchestrates the sorting to the apical (refer to numbers in Figure 1[1]) and basolateral [2)] PM, the endo-lysosomal system [3] and to earlier Golgi cisternae [4]. As an additional layer of complexity, secretory cargos may not necessarily shuttle to the PM directly, but instead can be routed to the apical PM indirectly via apical recycling endosomes (AREs) [1b] and to the basolateral PM via perinuclear recycling endosomes (PREs) [2b]. 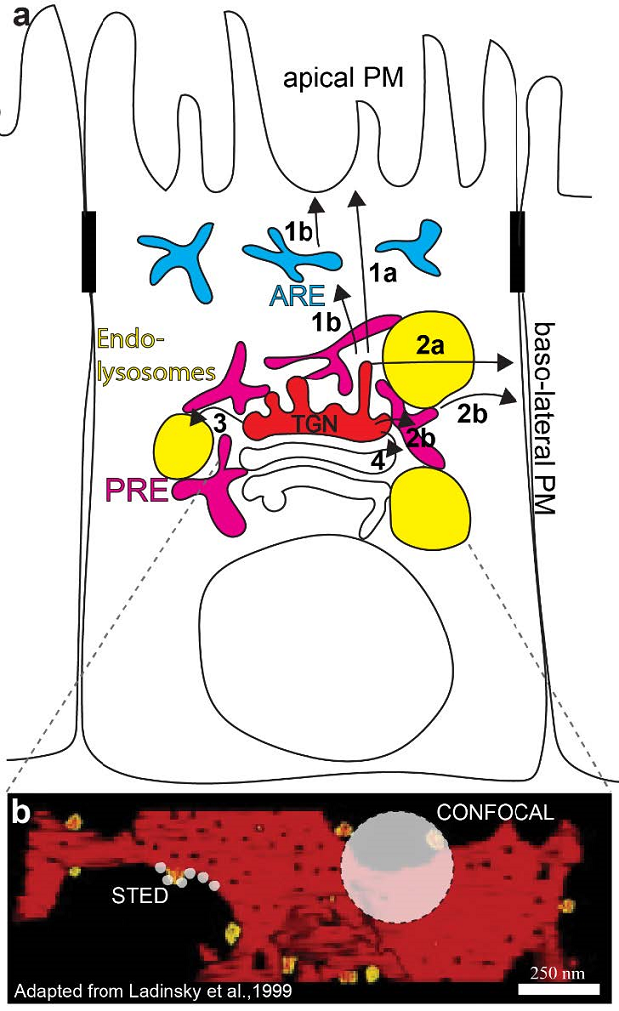 Figure 1: The TGN is a crucial sorting station along the secretory pathway. (a) The TGN (red) sorts cargoes into transport carriers for the apical and basolateral PM either directly [1a-2a] or via apical recycling endosomes (ARE; blue) [1b] and perinuclear recycling endosomes (PRE; magenta) [2b], the endo-lysosomal system (yellow) [3] and earlier Golgi cisternae [4]. (b) Point spread functions for a confocal microscope and a stimulated emission (STED) microscope are represented by off-white circles on an electron tomography model of the trans-most Golgi cisterna (adapted from Ladinsky et al., 1999). Super-resolution is allowing us to gain more details on Golgi processes in living cells.

Despite significant advances in identifying the machinery and molecular mechanisms involved in cargo sorting at the trans-Golgi network (TGN), we know little about the sub-compartmental nanodomain organization of the TGN that likely underlies the spatio-temporally controlled sorting of distinct cargos to different organelles or plasma membrane domains. Sorting at the TGN is particularly important, yet remains poorly understood, in polarized cells, where it is unknown whether apical and basolateral cargoes segregate at the level of the TGN or in downstream endosomal compartments. Thus, in project A25 we study the mechanisms of sorting at the TGN in epithelial cells by combining super-resolution stimulated emission depletion (STED) imaging and acute inactivation strategies.

Specifically, we investigate the contribution of adaptors and clathrin scaffolds in post-Golgi sorting and trafficking. Harnessing CRISPR/Cas9 to generate knock-in cell lines of clathrin assembly protein complexes (APs), monomeric adaptors (gamma-adaptin ear homology, ARF-binding [GGAs]) and clathrin we will establish a quantitative nanoscale map of scaffold proteins at the TGN. We complement super-resolution with proteomic approaches and functional studies using a halo/PROTAC system for acute degradation of endogenous Halo-tagged (Buckley et al., 2015) proteins to investigate the cascade of events leading to efficient sorting and the role of hosphoinositide signaling in the recruitment of adaptor scaffolds. 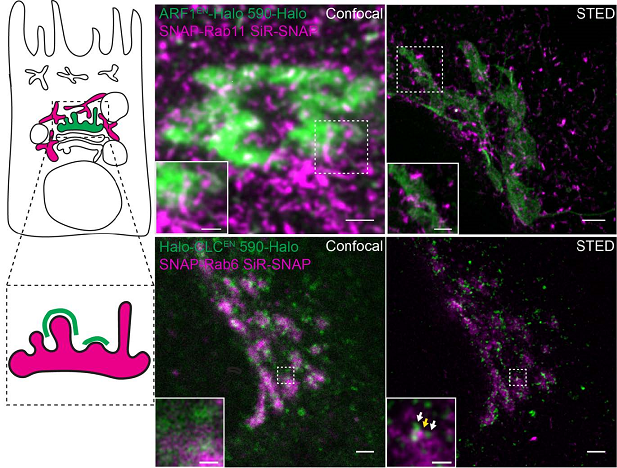 Our studies will shed light on the functional role of distinct types of adaptor-based scaffolds and their role in TGN nanodomain organization to segregate and sort distinct membrane cargoes in polarized epithelial cells.