Membrane-associated guanylate kinases (MAGUKs) are a family of multi-domain proteins defined by the minimal presence of PDZ, SH3, and GK-like domains, which make up the conserved MAGUK core. These and other domains allow MAGUKs to engage in diverse protein-protein interactions and thus serve as central players in membrane-associated scaffolds that mediate cell-cell communications and cellular signal transduction (Figure 1). A subset of MAGUKs is highly expressed in dendritic spines and has an established role in regulating synaptic transmission and plasticity. These functions rely substantially on their direct association, via classical ligand-PDZ domain interactions, with transmembrane AMPA receptor complexes at the post-synaptic membrane. Simultaneous interactions of the MAGUK core with various cytosolic structural and regulatory proteins enables these scaffold molecules to play central role in receptor-mediated signal transmission. 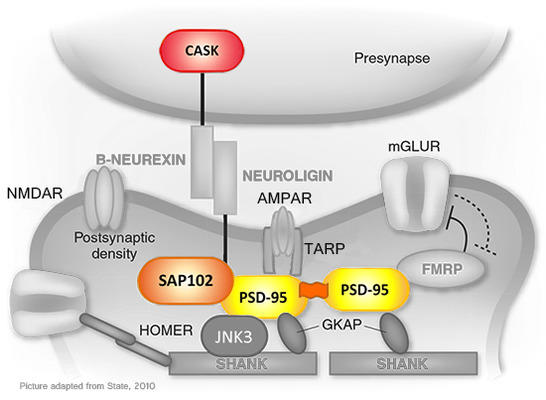 Understanding how synaptic MAGUK scaffolds are regulated, and how this mediates the bidirectional transmission of signals between the membrane and the cytoskeleton is thus of critical importance for understanding multiple aspects of neurotransmission and synaptic plasticity. In our studies, we have observed that protein-protein interactions of the prototypical synaptic MAGUK PSD-95 are subject to allosteric regulation. In particular, binding of a ligand to the PDZ domain within the MAGUK core (PDZ3-SH3-GK) results in conformational changes in the molecule that have direct influence on the oligomerization properties of PSD-95 itself, and also on its binding affinity for a subset of regulatory interacting proteins that have been shown to bind distal regions of PSD-95. This list includes the kinases c-Jun N-terminal kinase 3 (JNK3) and cyclin-dependent kinase-like 5 (CDKL5), which have been implicated in neurodevelopmental disorders and may be essential regulators of PSD-95 and other synaptic MAGUKs. In this project, we plan to delineate how such known and novel PSD-95 protein-protein interactions affect the structures of the interacting regions as well as the intra-molecular MAGUK organization including distal regions, taking advantage of in vitro interaction studies, as well as single molecule FRET approaches and NMR. We will further investigate how induced conformational and architectural changes regulate PSD-95 scaffold formation and stability, and thereby influence the molecular composition, structure, and function of the synapse. Additional studies involve the analysis of other MAGUK family members; in particular we are interested in the uncharacterized scaffolding function of MPP family MAGUKs with regard to synapse formation and function.