The regulated release of neurotransmitters occurs via the fusion of synaptic vesicles (SVs) at specialized regions of the presynaptic membrane called the active zone (AZ). This region is defined by a cytoskeletal matrix that is assembled at AZs (CAZ), where it directs SVs towards docking and fusion sites and supports their maturation into the readily-releasable pool. In addition CAZ proteins also localize voltage-gated Ca2+-channels in close proximity to SV release sites, bringing the fusion machinery close to the calcium source. Proteins of the CAZ therefore ensure that the vesicle fusion process is temporally and spatially organized, allowing for the precise and reliable release of neurotransmission (Fig. 1).

Importantly, AZs are highly dynamic structures, supporting presynaptic remodeling, changes in neurotransmitter release efficiency, and thus presynaptic forms of plasticity. Unfortunately, this places a huge metabolic demand on neurons as they strive to maintain synaptic protein repertieurs at great distance from the cells. To cope with these challenges, neurons have developed an array of cellular programs that monitor and control not only the biosynthesis, but also the degradation of synaptic proteins. Emerging data indicate that some of these are physically situated within presynaptic and postsynaptic compartments, allowing a local control and thus a balance of synaptic proteostasis. However, it is increasingly appreciated that this flexibility comes with a prices and appears also make synapses and thus neurons susceptible to environmental and genetics insults, which contribute to both neurodevelopmental and neurodegenerative disorders (Fig. 2).

Within project A18, we are interested in understanding how presynaptic CAZ proteins regulate synaptic proteostasis. Specifically our studies are focus on the roles played by two AZ proteins, Piccolo and Bassoons. These molecules have not only been found to locally regulate synaptic transmission, but the integrity of synapses. Emerging data indicate that they locally control synaptic proteostasis and thus synapse integrity by scaffolding component of the ubiquitin, proteasome and endolysosomal systems. To test this hypothesis, we are using a combination of biochemical, molecular and cellular approaches to identify these binding partners and assess their contribution to the maintenance and clearance of SV proteins, as well as the structural integrity of synaptic junctions. Long-term, it is anticipated that these studies will help explain how and why synapses lose their capacity to clear unwanted proteins and thus contribute to neurodegenerative disorders such as Alzheimer’s and Parkinson’s disease. 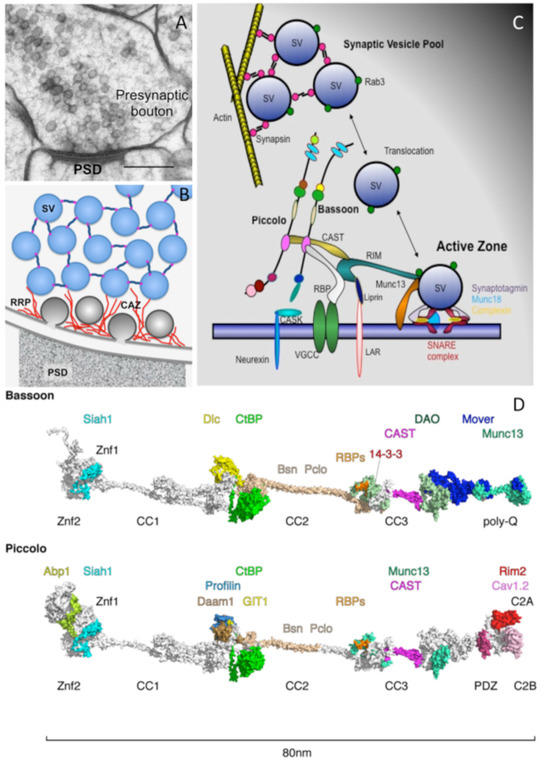 Figure 1: Piccolo and Bassoon at presynaptic active zones. A) Cryo-electron micrograph of an excitatory synapse from rat brain (size bar, 200 nm). B) Schematic organization of SVs within presynaptic boutons with SVs in the reserve pool tethered together via Synapsin and those in the docked pool embedded in the CAZ (red filaments). C) Schematic of CAZ molecules directing the clustering, translocation, docking, positional and molecular priming and fusion of SVs. D) In-silico modeling of Bassoon and Piccolo structures with docking sites for binding partners color coded. The structures include X-ray and NMR data for Zinc finger, PDZ, coiled-coil and C2 domains (See Gundelfinger, Reissner and Garner, 2016) 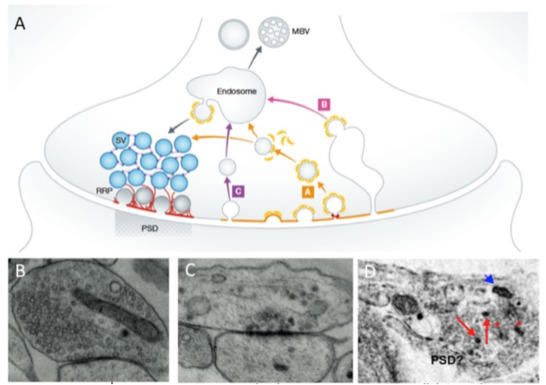 Figure 2: Membrane trafficking within presynaptic boutons maintains synaptoc integrity.(A) The presynaptic AZ functionally defines the space within boutons where upon calcium influx synaptic vesicle fusion and neurotransmission takes place (top panel). It is the center of the SV life cycle. Vesicles are recruited from the vesicle cluster towards the AZ where they undergo maturation steps like docking and priming and finally fuse with the plasma membrane upon action potential stimulation. After exocytosis SV protein and membrane retrieval occurs through endocytosis in a region spatial adjacent to the active zone, the peri-active zone. It is an important compensatory reaction to recapture excess membrane and generate new SVs. Mis-folded proteins and organelles are then eliminated by the endosomal/lysosomal and autophagy systems. (B-D) EM micrographs of excitatory synapses in different states of health (B), weakening (C) and disintegration (D). The latter are both characterized by the loss of SVs and appearance of pleotropic vesicles, multivesicular bodies and autophagophore membranes containing organellar debris. (See Ackermann et al., 2015).