The PTEN phosphatase represents a key node in protein-protein interaction networks and, through binding and modulation of other signaling components, regulates diverse aspects of cellular morphology and homeostasis1. PTEN functions predominately at the cell membrane, converting phosphatidylinositol 3,4,5-trisphosphate (PIP3) to phosphatidylinositol 4,5-bisphosphate (PI4,5P2), thereby directly antagonizing the activity of phosphoinositide 3-kinase (PI3K) and its established downstream signaling pathways. Much progress has been made in characterizing the function of PTEN and its binding partners in neurons, especially during the processes of neurite outgrowth and synapse formation2-4. However, how such PTEN-based scaffolds are dynamically regulated and involved in regulating PI3K or other signaling systems is less clear.

We propose, here, to explore the role of membranous PTEN scaffolds in the vicinity of the plasma membrane, which regulate cortical actin dynamics and/or membrane trafficking during neuronal circuit formation. Our previous proteomics screen of components of PTEN-based scaffolds in neurons identified several cytosolic PTEN-interacting proteins (for example members of the Myosin V family of motorproteins and the actin-binding protein Drebrin (DBN)5, 6), as well as membrane associated proteins (for example members of a family of transmembrane Lipid Phosphatases).

To analyse the function of PTEN scaffolds we will use neurons derived directly from embryonic stem cells (ES cells) as our primary experimental system7. ES cell-derived neurons allow us to rapidly introduce genetic modifications such as fluorescent fusion proteins, cell compartment-specific variants, null mutations, and RNAi knock-downs and then to systematically assay the interaction of PTEN pathway components through epistasis experiments.

Finally, we will apply SILAC-based quantitative proteomic technologies in ES cells derived neurons in order to probe for the existence of other distinct neuronal PTEN scaffolds that associate in specific cellular compartments. 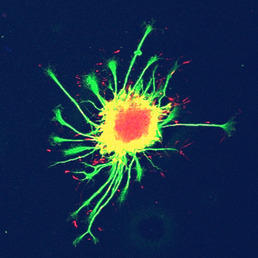