Synaptic vesicles fuse at specialized membrane compartments called active zones (AZs). The intracellular face of the AZ membrane is decorated by a proteinaceous cytomatrix, in which multiple copies of Bruchpilot (BRP) and RIM-binding protein (RBP) act as the main scaffolding proteins (1). In project A06 we want to elucidate the architecture of the AZ scaffold organized around BRP and RBP and delineate how this structural organization supports AZ functions. Within the last funding period we found that two BRP isoforms alternate in a circular array of oligomeric clusters to form the central body of the AZ scaffold, likely involving homo-oligomerization via a coiled coil domain in the central region of BRP. We also showed that RBP binds apparently stoichiometrically to the BRP central body and that RBP incorporation depends on its N-terminal region that also comprises a putative CC domain (2). Results from our biochemical/biophyscial and structural investigations of the interactions of two SH3 domains in RBP with various partners support a role of RBP in concentrating effectors for synaptic vesicle release at the base of the AZ scaffold (3). We also elucidated the crystal structure of a triple fibronectin 3 (FN3)-like domain-containing region of RBP and are presently analyzing whether this domain array acts as an architectural element in RBP or as a protein-interaction platform in the AZ scaffold. We started to investigate the regulation of AZ scaffold assembly and function by reversible protein phosphorylation and small GTPases of the Rab family (4). Finally, by crystallographic analysis we described the molecular interaction between Neurexin (Nrx) and PDZ domains of the early AZ assembly factors Syd-1 and Spinophilin, which contribute to BRP and RBP assembly at the AZ (5). We will focus on fine-mapping of interaction surfaces between the core AZ components BRP and RBP as well as between these proteins and other AZ components by yeast two hybrid. Furthermore, we will continue to explore how BRP phosphorylation and binding of Rab proteins influence AZ assembly and remodeling. Finally, we plan to investigate how PDZ domain protein-Nrx interactions correlate with AZ scaffold assembly and how thereby the number and size of AZ scaffolds are determined. To these ends, we will continue to combine high precision protein localization and morphological analyses of Drosophila neuromuscular junction model synapses via nanoscopic techniques with genetics and structural biochemical approaches. 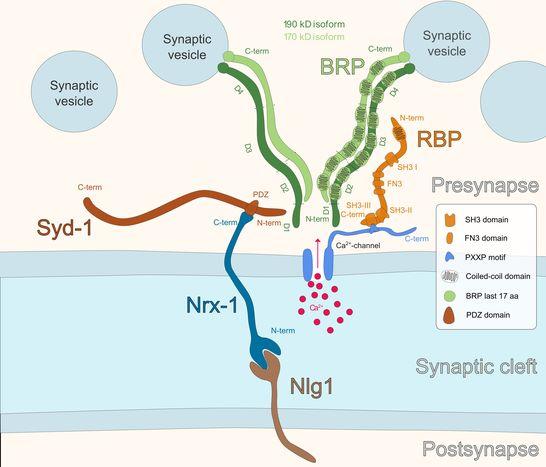 Molecular model of the core AZ scaffold shaped by BRP/RBP and proposed interactions.