A12 - Structural and functional analysis of GIMAP scaffolds

GTPases of IMunity-Associated Proteins (GIMAPs) comprise a family of septin-related guanine nucleotide binding proteins which are predominantly expressed in lymphocytes and have been implicated in the regulation of apoptosis. Our recent biochemical and structural analysis of a representative GIMAP family member, GIMAP2, revealed the molecular basis of GTP-dependent oligomerisation which involves two interfaces in the G domain. Whereas the amphipathic helix a7 in the C-terminal extension closely folds against the G domain in the GDP-bound state, it might be released in GTP-bound state and assemble interaction partners. We also showed that the GIMAP2 oligomer functions at the surface of lipid droplets in the Jurkat T cell line.

Based on these results, we propose that GIMAPs oligomerise via the two identified interfaces to form GTP-dependent, membrane-associated protein scaffolds, which recruit interaction partners via helix a7 and regulate apoptotic events. In the current proposal, we wish to study structural and functional aspects of these GIMAP scaffolds. In particular, we will analyse the mechanism how the GTPase activity in GIMAPs is activated, concomitantly with the disassembly of the scaffold. We will identify novel binding partners of GIMAP scaffolds by a mass spectrometry approach and analyse the molecular details how these and already described binding partners of the Bcl2 family associate with the GIMAP scaffold. Finally, we will explore the function of the GIMAP2 scaffold at the surface of lipid droplets and its role for the progression of apoptosis in lymphocytes. 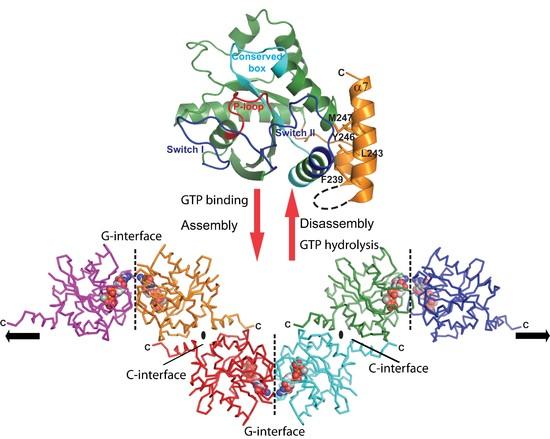 (top) Structure of the monomeric nucleotide-free GIMAP2 shows a Ras-like G domain (in green) with two additional amphipathic helices a6 and a7 (in orange) folded against switch II (blue).

(bottom) In the absence of a7 and presence of GTP, GIMAP2 oligomerised via the G- and C-interfaces in the crystal to form a linear oligomer. In a full-length context, a7 might recruit interaction partners to this membrane-associated GIMAP scaffold. The conversion between the monomeric and oligomeric state is regulated by GTP binding or hydrolysis (red arrows) (from Schwefel et al., PNAS 2010, Schwefel et al., SGTP 2011).