A08 - Sorting of VGLUT between vesicular and plasma membrane compartments: role of endocytic proteins scaffolds and their impact on synaptic transmission

Retrieval of synaptic vesicle (SV) membrane proteins requires their recognition by endocytic factors that build up a complex protein network. This network consists of heterotetrameric AP2 complex, as well as multidomain endocytic proteins including the BAR-SH3 domain protein endophilin, its binding partners dynamin, clathrin, and others. The precise arrangement of this protein complex is required to scaffold the periactive zone membrane. Generally SV are equipped with a common set of proteins; in addition SVs of excitatory and inhibitory neuron subtypes differ at least in their respective vesicular transmitter transporters. Glutamate-containing SVs contain vesicular glutamate transporters (VGLUT1 and VGLUT2), multispanning membrane proteins required for glutamate uptake and storage.

We have found that the amount of VGLUT1 and VGLUT2 on SVs prepared at different times of the day changes drastically whereas the total cellular pools of both VGLUTs remain constant, suggesting a highly regulated sorting process of VGLUTs between cellular membrane systems (Fig. 1). This diurnal cycling of VGLUTs is impaired in mice lacking the master clock regulator PER2. 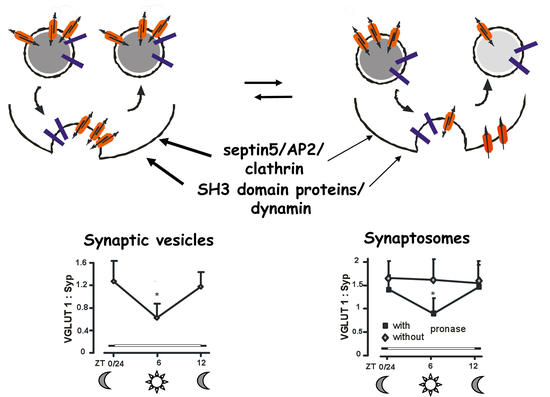 Fig. 1 Diurnal cycling of VGLUT1 between SV and plasma membrane

Irrespective of the diurnal sorting behaviour, cycling of VLGUT1 and VGLUT2 appears to employ distinct mechanisms of sorting between SVs and the plasma membrane. While VGLUT1 endocytosis may be mediated by endophilin and other scaffolding proteins like septin 5 as suggested from pull down experiments, VGLUT2 appears to directly interact with AP2.

1. Biochemical characterization of the endocytic scaffolding proteins involved in VGLUT1 and VGLUT2 retrieval. To this end proteomic analysis of pull down experiments (using endophilin, dynamin, septin 5 and VGLUT peptides) as well as immunoprecipitations (using antibodies against VGLUT1 and VGLUT2 as well as endophilin) will be performed.

2. Electrophysiological characterisation of the impact of diurnal variations in vesicular VGLUT amounts at the level of individual synapses.

Fig. 2 Scheme of the procedures to follow diurnal changes in glutamatergic transmission

In addition, accumulating evidence from individual synapses indicate that the number of VGLUT copies per vesicle directly influences synaptic transmission.  Together this argues for an unexpected functional plasticity of presynaptic glutamatergic transmission. VGLUT1 interacts with endophilin A1 and this interaction along with an ill-characterized dileucine-like motif has been claimed to regulate fast endocytosis of VGLUT1. By contrast, VGLUT2, which does undergo diurnal cycling similar to VGLUT1 does not bind to endophilins, but instead directly interacts with AP2. Thus, we want to test the hypothesis that differences in the access of VGLUTs to the endocytic machinery are organizing diurnal cycling of VGLUTs.

To this end, we will use complementary biochemical, proteomic, optical, and electrophysiological approaches to unravel the association of VGLUTs with the endocytic machinery and its role in diurnal cycling of VGLUTs between SVs and the plasma membrane. Tailored proteomic approaches will track down novel factors enabling access of VGLUTs to the endocytic protein-based scaffold. Biochemical and optical imaging experiments paired with genetic manipulations shall allow us to analyze the relevance of endophilins and AP2 for the partitioning of VGLUT1 and VGLUT2 between internal pools and the cell surface. We will use hippocampal neurons in culture expressing pH-sensitive VGLUT-pHluorins or myc-tagged VGLUTs and mutants thereof as reporters to identify motifs involved in exo-endocytic sorting and to track down the endocytic factors to which they bind. Such studies will be complemented by immunoprecipitations and direct binding experiments using whole brain lysates from mice entrained under light/dark or dark/dark conditions or VGLUT1/2-expressing PC 12 cell lines. Diurnal changes in VGLUT sorting between vesicular and the plasma membrane compartments should be reflected by diurnal changes in glutamatergic transmission at the level of individual synapses. This will be explored by electrophysiological methods. On the long run these studies aim at unravelling the mechanisms that allow spatiotemporally regulated access of SV cargo to the endocytic machinery.